If you’ve ever wanted a treehouse as a kid and are now interested in tiny living I think you’ll love this..

It’s a micro cabin with a balcony/deck that hovers over the main house on the property.

But it’s not just any kid’s fort either… This is a fully functioning micro cabin with: I encourage you to tour it yourself below and let us know what you liked best about it in the comments: 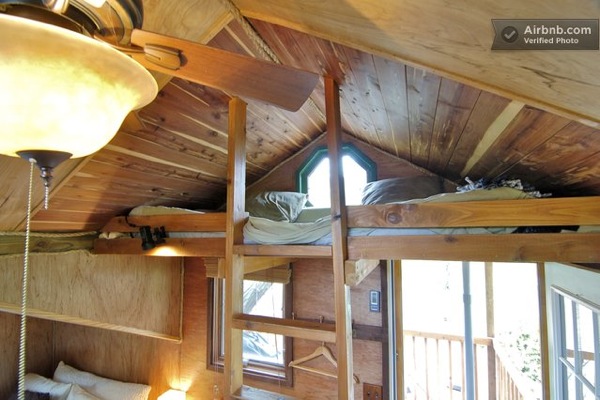 Outdoor Shower by the Main House I can imagine myself having a micro cabin like this somewhere out in the forest as an affordable vacation space to get away from it all and maybe even have another two or three cabins just like it for friends and family. Somewhere off grid where land is affordable and there are no building codes.

But for full time living it’s definitely too small for me. Especially since I don’t live by myself. How about you… What would you use a micro cottage/cabin like this for?

By the way you can actually try this teeny treehouse out yourself it’s in Schaumberg, IL and is available to rent over at AirBNB.

If you enjoyed this treehouse you’ll love our free daily tiny house newsletter!