Years ago virtually every home in this country was built by the men and women who lived in them. They were homes, barns, outbuildings of one form or another, silos; homes for people, crops, and livestock. These were places of shelter and it was envisioned by the builders that they would serve as such for years on into the future, long after they were built, and perhaps long after the builders themselves were gone.

When I started building my tiny house I went back to that premise of building; the owner-builder, the homesteader in need of shelter, because in many ways that’s exactly where I found myself.

I looked at simple building books, books on sheds and small outbuildings, the books on the market (before Kindle and Amazon) that dealt with cottages and tiny homes that were built with the intention owners would add on to them at a later date, books on writer’s cottages and fishermen’s cottages, treehouses, huts and forts; anything that was built from scratch, and constructed without intricate detail or complexity. Over time, as my search continued, I came across plans that were specifically designed to be built on top of trailer frames or flatbeds. They were portable and they were called tiny houses. Some looked like gypsy caravans, others like the cottages I’d been reviewing with the only exception being that these were on wheels. They were portable and ideal for someone like me whose future seemed continually subject to revision.

END_OF_DOCUMENT_TOKEN_TO_BE_REPLACED

Remember Alek’s amazing DIY tiny house on wheels that I showed you a while back?

If you haven’t seen it be sure you check it out because it’s one of my favorite designs.

And now I’m glad to announce that Alek has made the plans available for us to purchase.

Or you can take the SketchUp File he provides and customize it to your own needs more specifically (if you wanted). See and learn more (for free) below before you buy:

END_OF_DOCUMENT_TOKEN_TO_BE_REPLACED

I’ve been wanting to introduce you to ShelterWise‘s 96 sq. ft. Salsa Box Tiny House on wheels so here it is. You might like this mobile micro cabin if you want a cozy and compact micro home for simple living and occasional traveling because it’s an easy to tow tiny home.

The one you’re seeing here is the 12′ model but it’s also available in 16′ and 20’ lengths. And everything about it works pretty much just like an RV (30 amp hookup and water connections). What might surprise you is what’s inside (full bathroom, kitchen, and queen bed for sleeping). END_OF_DOCUMENT_TOKEN_TO_BE_REPLACED

Woman in her 50s Builds her own Debt-free Tiny Home

Why in the world would a female member of AARP who has never built a thing in her life attempt to teach herself the skills necessary to build a tiny house?

There are a great number of people talking about tiny houses these days. That was not really the case when I got the idea for my tiny home. My idea stemmed from a logical practical need.

It didn’t begin as some magnificent business plan. It began quietly and simply, a possible solution to a very big and very real need. I’m not an architect. I’m someone who has spent her life seeing problems solved with common sense and perseverance.

END_OF_DOCUMENT_TOKEN_TO_BE_REPLACED

During the big snow storm last week, Karl and I walked up the hill from our tiny house to our newly dried-in (Woohoo!) ‘big’ house to watch the falling snow.

The snow in the woods was magical and the view in all directions was spectacular.

I looked up at the rafters and there was no snow falling in the house!

After more than a year of watching rain and snowfall on our house, this was big.

I smiled at Karl. “How does it feel to go into this snow storm with a finished roof on the house?”

He took a deep breath. “You have no idea.”

Here’s How You, Too, Can Build a Mortgage-free Homestead That was a nice moment.

We’ve come so far, and it’s so important to take time to celebrate all of the milestones along the way.

END_OF_DOCUMENT_TOKEN_TO_BE_REPLACED

Couple Build Their Second Tiny Home for only $5200

A Guest Post by Ethan – (Send us your tiny house story)

You might have last heard from me back in October/November about the first tiny home that my girlfriend Kelsey and I built and lived in outside of Austin Texas on an organic farm.

Well since that time my girlfriend and I were asked if we would be interested in selling our house and since I had already been considering building another one because building the first was so much fun we decided to take the offer on our house.

The man who bought our house also lived in our city and was interested in actually joining us in living on the farm in the house and paying the house off over time and since we had been wanting to expand the tiny house area of the farm which is called “Tiny Town” we thought that was a wonderful idea. This conversation was had in late November and so we instantly got to work on the second house, because the first house was going to it’s new owner at the end of February.

END_OF_DOCUMENT_TOKEN_TO_BE_REPLACED

Couple Builds Tiny Home to Live in their Portland Backyard

That’s right, “couple builds tiny home to live in their Portland backyard while they rent out their main house for income.”

Mike and Laura were recently featured in the Sustainable Business Oregon by the Portland Business Journal.

They’re a couple who have built a 160 square feet tiny house on a utility trailer to avoid zoning restrictions on tiny housing.

According to the article they use the micro home to supplement their income. But here’s the twist.

They’re moving into the tiny house and renting out there big house to live simply.

One Path to Freedom: Tiny House Living in your Backyard END_OF_DOCUMENT_TOKEN_TO_BE_REPLACED

When she was 12 years old she started building her own debt-free tiny house.

This all started around January 2013. It’s just about a year and 4 months later now and she’s finished the project.

Sicily now owns her own debt-free 128 sq. ft. tiny home on wheels that she built herself. 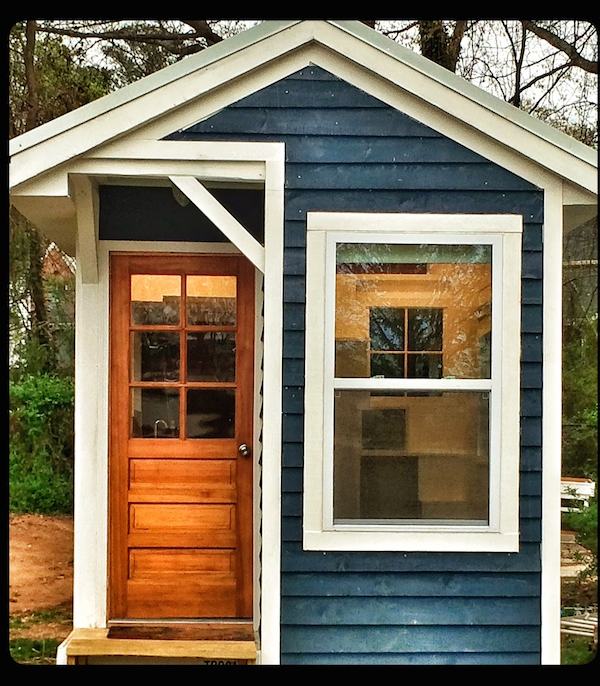 END_OF_DOCUMENT_TOKEN_TO_BE_REPLACED

According to the Huffington Post Kayla Feenstra is a landscaper who’s found a way to live better without a mortgage.

She designed and built the home of her dreams. It just happens to be a mortgage-free tiny home of just 130 square feet.

It’s been nicknamed, “Jack in a Box.” And she built it for just $15,000 and two months of labor. It was built right onto a trailer.

So if she ever wants to move she can simply tow and go. Especially since she doesn’t own her own land.