Last year, in a Podcast conversation with Andrew Odom of Tiny Revolution he asked me why we built our tiny house on a foundation rather than wheels. I chuckled because the answer was actually quite boring and practical. Our tiny house is on a mountain and there is a significant slope to the land. We built it on a post a pier foundation to avoid two things: the house rolling down the mountain and having to bring heavy equipment up the mountain to level a spot and pour a slab.

We chose this location because it is where we wanted our tiny house to be.

I won’t lie – the foundation was the single hardest thing we did during our tiny house build. It was a pain to figure out how to build it in three dimensions. Not only did we need it to be square and level but it also needed to be plumb. We agonized over this process and in the end we have a very well-built house that is pretty solid. 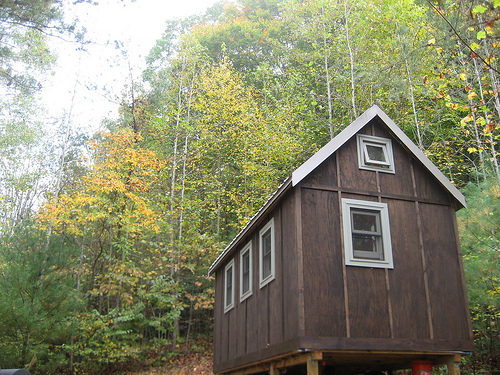 The steps for building our foundation were: We had a friend help us with the auger because no matter how tough I pretend to be that huge machine was not something I could handle. Once the holes were dug, though, Matt and I were on our own.

Read more about our construction below. The process of pouring our concrete was as mentally exhausting as it was physical. Our unreliable ATV was true to form that day. We tried to load bags of cement on the trailer but it just wouldn’t run with more than three. Eventually we just ditched the trailer all together and loaded two bags on the back and one on the front of the 4 wheeler. Matt drove back and forth up the mountain – loading the bags on the ATV – taking them off the ATV – repeat. We also borrowed a cement mixer that needed to get up the mountain and since we don’t have running water of any sort we had to fill several 7-gallon containers up and transport them to the building site as well. Water is heavy. This process took a lot longer than we expected and we didn’t even start pouring concrete until mid-afternoon on Sunday. And I had to be back to work at 8:30am on Monday – in Atlanta.

At first we were a well-oiled machine. Concrete in the mixer, water in the mixer, pour it in a bucket, pour it in the tube…over and over and over again. As the day marched on and we began to lose sunlight we stopped working well together. I was stressed out about getting done and back to Atlanta. Matt was stressed out about making sure the piers were perfect. Finally, as the sun was setting behind the trees we poured the last pier and set the anchor bolt by the beam of a flashlight.

We didn’t get back to Atlanta until 2am. A couple of weeks later we had some friends come up to help us cut the posts and start the decking for the house itself. This process went a lot faster, but we still made our share of mistakes. I remember starting to nail the frame in before we realized we hadn’t squared it. We had to pull all the nails and start over again. Today, four years later, we have an adorable little tiny house right where we wanted it – in the middle of Smoky Mountains secluded in the trees. I don’t think it is hyperbole to say that the foundation was one of the hardest things I have ever done but I wouldn’t change a thing. I figured if we could get through that we could do anything together. I suppose you can look at our foundation as more than the physical structure and as a metaphor for our new tiny life. Next post: How Small Spaces Give You More Freedom And 5 Tips on Simple Living