1140 Square Foot Small House Made out of Salvaged Cars

They call it the McGee House. It consists of 104 salvaged car roofs which cover the upper side walls of the home. The inspiration behind the upper siding came from fish scales.

The lower wall siding is made out of a waste product from the furniture industry in clad form called poplar bark.

The awnings are side windows from America’s best-selling minivan, the Dodge Caravan.

It’s a 2 bedroom home with two levels and a gorgeous upstairs balcony.

From the outside, at just 14′ wide, it appears smaller than it’s actual size. 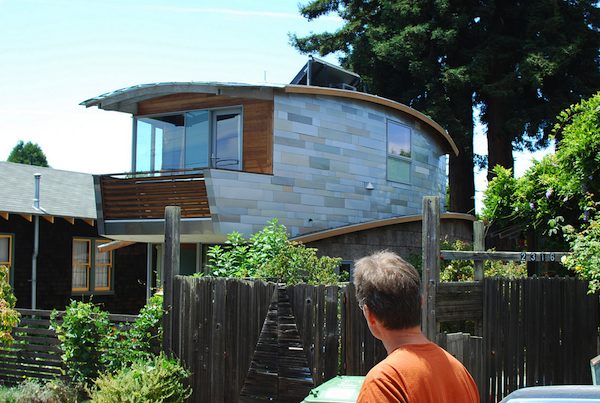 Inside you’ll find high ceilings and over-sized windows that open up to nature.

Head to the backyard and you’ll run into a work studio made out of a used and refrigerated shipping container that was already insulated.

The couple’s daughter, when inviting her friends over, says, “Look for the house that’s different.” For even more photos of the home head over to Nicolas Boullosa’s flickr set and watch Kirsten Dirksen’s video tour over at Faircompanies.com. For more details on this green home visit Leger Wanaselja’s GreenDwellings.com.

Next post: Things to Think About Before Moving into a Tiny House in the Mountains