Tiny House Living Transitions: Making the Decision to Leave the Tiny Life Behind

What is the permanence of the tiny house living? Do people move into tiny spaces and live there for the rest of their lives? Since the movement is still rather young I imagine that we have not yet reached that moment of maturity when the first generation of tiny dwellers begins to consider their next move. I was certain that stories had to be out there of people who made the decision to leave tiny behind so I searched and found three tiny house builders who made the decision to move.

Almost a year ago Zoey from Living Tiny 365 posted that after some changes in her life she was moving from her Lusby into a condo with her new partner. The condo, she said, was still small at 700 square feet and that her daughter was planning to move into the tiny house. I reached out to Zoey to find out more about her life since the decision to move out of her tiny house but I have not yet heard from her. Zoey, we would love to hear the next chapter in your story so please reach out if you see this. Collin and Joanna, a young couple who documented their tiny house build at their blog Our Wee House announced in January that they were expecting a baby and putting their newly built Fencl on the market. In spite of his busy new life with a brand new baby boy, Collin took a few moments to answer some questions for me. I asked if they missed living in the tiny house. “We do and we don’t miss living in it. Where the house was situated when we were living it was quite far out of town. Through the process we realized again that we love being around people. Where we live now is right in the city and we love it.” But they don’t regret their tiny house experience. “I am so glad that we did it but for us it was for a season. Some people can really strip down there stuff and we did, but not for it to work. It may have been different if we had our own land. Not sure. We have things like several musical instruments and a winter wardrobe.” I asked if they would consider another form of alternative building and Collin expressed an interest in an Earthship for their next project. They still haven’t sold their tiny house, so if you are in the market for a Fencl, and are near the Ontario Canada area, you might want to consider their tiny house. 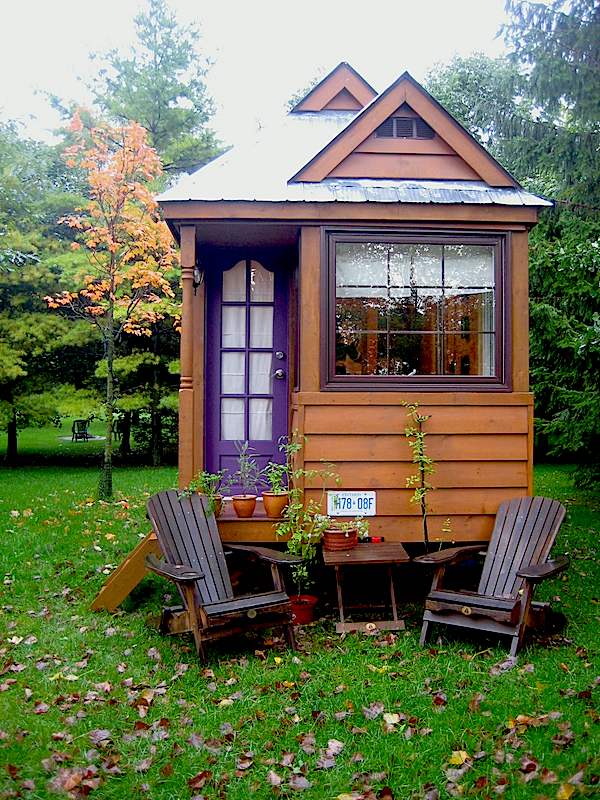 I was also able to talk with Jonathan, whose LiveJournal is a great first person account of all the ups and downs of the tiny house journey. I’ve known Jonathan online for years, bonding over a common origin from the mitten state of Michigan and our shared love of tiny homes. Earlier this year Jonathan had to make the heartbreaking decision to leave his tiny house behind but began a new adventure in Eugene Oregon.  “In June of 2009 I started building my tiny house with the hope of one day being able to live in it on a plot of wooded land (just a couple acres) out in the country.  Building it turned out to be the easy part – as was actually living in it.  Being allowed to live in it was the issue, as the county in which I lived in Southeast Michigan, as well as all of the counties surrounding it, all declared dwellings under 960 square feet to be uninhabitable.  I spoke to code officials, zoning officials, and went to town hall meetings in several townships before finally realizing that the laws and bureaucracy were stacked against me.  Not wanting to abandon my dream, I purchased some land anyway and parked my tiny house far enough back in the trees so that it couldn’t be seen from the street.  Unfortunately, it could be seen by the neighbor, who told me (on the day I closed on the property) that he had wanted my land.  A few months later, I discovered that he had reported my tiny house to the zoning board, and the code officials stuck a notice on my door saying I was in violation of the law.” Unlike Zoey and Collin, Jonathan didn’t choose to move out of his tiny house. However, he said that if he had not been forced to make the change he would not have embarked on his current adventure. Jonathan left his tiny house in Michigan and followed the famed Oregon Trail out west, a move he is very glad that he made. But was the fate of his house? “My tiny house is currently still on the property in Michigan.  It’s perfectly legal for me to leave it there; I just can’t live in it there.  Yes, see, it is fully within my rights to buy the land and do whatever I want with it – neglect it, trash it, whatever.  However, I am not allowed to live on it and take care of it because my house is too small.”  Jonathan doesn’t plan to be without his tiny house forever. He is currently looking into his options to move his tiny house out west, so I promise I will follow up with his story.

People who build and live in tiny spaces are unconventional by nature. Life is forever changed by the tiny house experience. Even though they may have shifted gears they haven’t altered their new way of thinking. I know tiny living has changed me immeasurably. I want to see more stories out there. Do you know anyone who has built a tiny house but doesn’t live there anymore? Send them our way to share their experience.

More Like This: Tiny Houses | People Trying to Live in a Tiny House | THOW

Older post: They Built a Mortgage-free Small House for $5,900