This is the inspiring story of how a man, Reverend Jeff Obafemi Carr, is leading a small group of people who are building a community of micro homes called Infinity Village for homeless people in their neighborhood who were formerly living in tents.

For days, the group worked in a remote green space just off of Rosa Parks Boulevard, erecting tiny houses. On Friday morning they traveled by trailer down Broadway and by lunchtime a village of small, stand-alone structures assumed permanent residence at Green Street Church of Christ ready to shelter Nashville’s homeless. END_OF_DOCUMENT_TOKEN_TO_BE_REPLACED

A group of local teens in Seattle are developing an eco-village called The Impossible City to benefit the local homeless people in the area.

They’ve even put together an Indiegogo fundraising campaign that has so far raised a total of $27,744 as I write this.

With the campaign scheduled to close on April 26, 2015, they’re just a few thousand dollars short of their goal to raise $32,205. And it looks like they’re going to make it!

This project is backed by Sawhorse Revolution which is a non-profit carpentry program for high school students in Seattle. So far they’ve designed a green house, micro home, solar hubs, communal kitchens, composting outhouses, and more for the village (all of which you can see sketches of below). Please enjoy and re-share below. Thank you. END_OF_DOCUMENT_TOKEN_TO_BE_REPLACED

Right now I want to give you an update on OM Build which is a tiny house community for the homeless in Madison, Wisconsin.

If you feel called to I’d also like to invite you to help support the growth and completion of the community with your own donation.

Occupy Madison is building tiny houses for people who don’t have homes. So far, they have completed the first three tiny houses, according to this article on the Huffington Post.

The next phase is to build six more tiny houses along with a community area with a bathroom, kitchen, laundry room, and more. 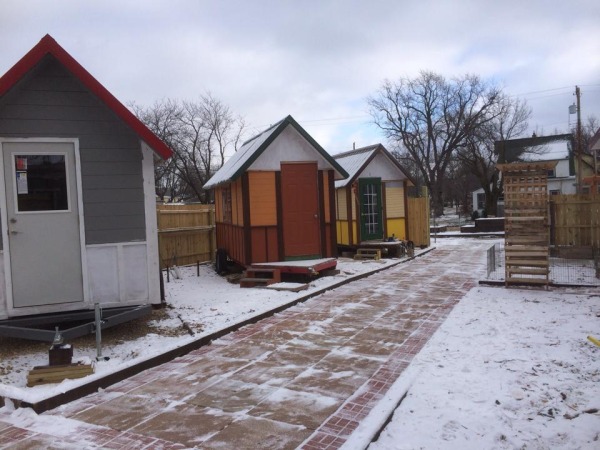 END_OF_DOCUMENT_TOKEN_TO_BE_REPLACED

Artist Turns Garbage into Micro Houses for Homeless in his Area

His name is Gregory Kloehn, an artist in Oakland, California who is building micro houses for homeless people in his area.

In the past, I’ve featured one of Kloehn’s earlier creations which were a micro house he built out of a garbage container.

Instead of trying to create art so that rich people will buy it from him now he’s decided to build tiny homes directly for those who need them most.

He dumpster dives until he has enough materials to build a one-room shelter for a homeless person. END_OF_DOCUMENT_TOKEN_TO_BE_REPLACED

A small charity group in Madison, Wisconsin is collecting donations and building 98 sq. ft. $3,000 tiny houses on wheels with the area’s homeless.

And it’s not just a hand out since the future tiny home owners labor away to help build their own homes, and hopefully some of their future neighbors homes too.

The houses are really tiny and very basic but they’re bound to make a huge difference in these people’s lives who have never had the chance to own a home in their lives.

With bathrooms and kitchens and a cost of just $3,000 to build I think there’s a huge opportunity to help lots of people get back on their feet and into a better environment to improve their lives.

Because nothing beats simply having a front door to close and be inside a warm home of your own. Occupy Madison is aiming to complete 10 more tiny homes by the end of 2014.

Where are they putting them? Great question! They’ve temporarily arranged parking with local churches until the group finds a permanent location for the homes. The goal is to obtain a plot of land where they can park around 30 of them.

Watch the video of the news segment below to learn, see more and even donate to the cause if you want to: