Meet John and Fin. They’re the Kernohans – a tiny house couple with a very inspiring story.

When John was diagnosed with a health condition, they quickly began re-prioritizing their life to make it their purpose to be of service to others. So they left their big city lifestyles and went to the woods of Georgia over seven years ago.

This is where they built their foundation… A 304-square-foot off-grid tiny barn cabin known as the ‘Beloved Cabin’.

Then they designed and built their second tiny home… A unique tiny house on wheels as a dedication to first responders that they could travel with.

The Kernohans are the founders of the United Tiny House Association where they have organized the largest tiny house festivals in the world… And in doing so, have thus far raised over $500,000 for charities! They Left The Big City For The Simple Life

John and Fin left the big cities of Miami, London, and Bangkok and have been living a simple life on their homestead in the woods of Georgia for the past 7+ years in their 304 sq. ft., off-grid, foundation-based tiny house known on social media as ‘Beloved Cabin’.

Their 148-sq.-ft. Tiny on Wheels Dedicated to First Responders… They travel the country in their 148 sq. ft. towable tiny house on wheels known as the ‘Tiny Firehouse – Station No. 9’.

I think that’s pretty awesome, how about you?

This is the largest membership tiny house support organization in the world with over 32,000 members.

In addition, they are the organizers of both the greatest number of tiny house festivals, as well as the four largest attended tiny house events on record in the world.

They Have Even Donated Over $500,000 of the Proceeds of These Events to Over 70+ Charities

It gets even better because in doing so, they have donated over $500,000 from the proceeds of their tiny house events to more than 70 charities and non-profits. John and Fin are completely debt-free thanks to living tiny.

They own – free and clear – their land, homes, and vehicles and they avoid carrying any credit card debt or loans of any kind.

Can you imagine life without any loan payments at all? No mortgage, no car loan, no credit card payments?

I think John and Fin are here to remind us that this is what tiny living is really about. 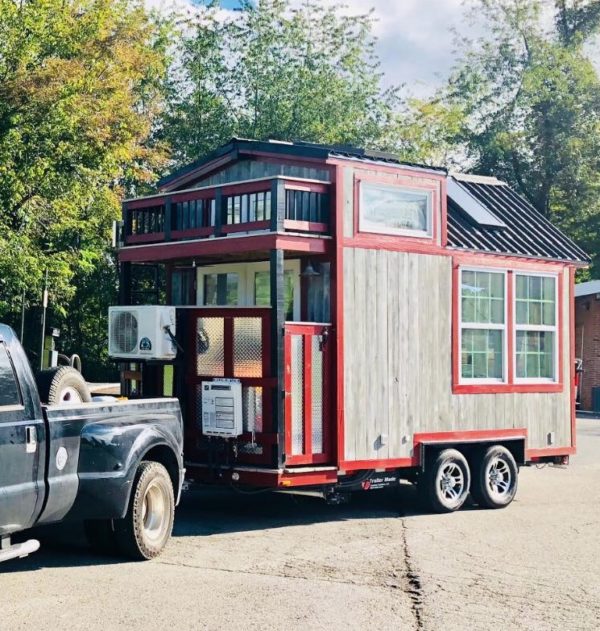 Not that long ago, John was diagnosed with a health condition which is what motivated them to reprioritize their life.

That’s when they vowed to make it their life’s purpose to be of service to others.

And we’re seeing that unfold before us.

Thanks, John and Fin for all you do!🙏 Learn more and connect with John and Fin:

Our big thanks to John and Fin for sharing!🙏