I started a project back in Nov 2014. I pulled it out of the shop and unveiled it to the world on Jan 2, 2015. My wife and four children, and myself have been following the tiny house movement for several years now. We purchased a 1984 Toyota Camper with a 22 R cylinder back in 2006.

After, what I thought at the time were some serious renovations, we hit the road, traveling all over the east coast, primarily in the mountains year round. As the years past, our family grew from the two of us to the six of us. In 2013 my wife and I decided it was time to upgrade. So, we purchased a small early 70s pull behind camper trailer. I paid $50 for this trailer and upon returning home my wife referred to it as an Appalachian mobile meth lab (a man of questionable status had been living in it for some years). I immediately went to work tearing it down to the shell, I then framed up four individual bunk cots with custom portholes and dry erase boards, 2 secret storage compartments, ample 12 volt and 1-10 power, ample hanging storage, a large table. END_OF_DOCUMENT_TOKEN_TO_BE_REPLACED

Check out how one man got inspired to build a Japanese style micro cabin on wheels.

It could be used for camping, as a backyard office or quiet reading space.

What would you use this DIY micro cabin for?

Below you can see a few photos and a video on this DIY micro cabin in Florida. 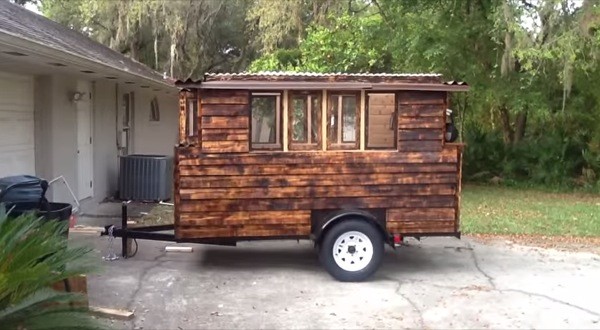 END_OF_DOCUMENT_TOKEN_TO_BE_REPLACED

Right now I wanted to let you know about Paul’s tiny house for sale. (SOLD) It’s a Wildflower tiny cabin on wheels that he bought a few years back from Tiny Green Cabins (Update: Page no longer found) and has been living in it for the last two years or so.

He doesn’t really want to sell it but the situation is that his parents are getting elderly so he’ll be assuming the mortgage of his parents home and moving to Seattle after many years in Boston.

And there’s no room for the tiny house on the small city lot where his parents are. Since he has nowhere to park it or keep it, he’s selling it and using the money for the move.