Micro Loft Tiny Apartments in Vancouver Rent for $850 a Month, Under 300 Square Feet

The thirty tiny apartments at 18 West Hastings Street are ideally located for young professionals who otherwise couldn’t afford to live downtown in notoriously expensive Vancouver, Canada. On the flipside, this new residential complex is located in a downtown neighborhood known for low incomes and high crime rates.

The Burns Block building that now offers micro lofts measuring less than 300 square feet used to provide cheap housing as a single room occupancy hotel. The new complex offers compact, high-end apartments for the up and coming but is it at the expense of the down and out?

When the building opened on December 19, the designers revealed the transformation from sketchy hotel to high-end housing complex. Politicians and supporters of the project cite it as part of Vancouver’s affordable housing strategy and claim creating mixed income neighborhoods is the best way to improve the area. However, the renovation caused a stir among housing activists in the area who claim it is a clear sign of the classist gentrification occurring in the poorer parts of downtown Vancouver. Opponents of the new building fear it is a tactic to force out existing residents rather than providing the social services that the neighborhood needs. They cite the West Hastings building is one of the first major signs of gentrification in the downtown eastside. The micro loft complex is one of the few non-subsidized housing opportunities in the neighborhood. Each unit ranges from 226 to 291 square feet and comes furnished with a fold-down bed, compact appliances, a flat screen TV, a sofa, several chairs and a coffee table. High ceilings and prominent windows make the tiny living spaces cozy. At $850 a month, including cable TV and internet, the lofts are actually notably inexpensive compared to other comparable Vancouver apartments.

Before the Burns Block building was condemned, it housed a seedy hotel known for housing sex workers and drug addicts. Next door, a non-profit home for sex workers, drug addicts and people with terminal illnesses reminds micro loft tenants that this is still a gritty part of downtown Vancouver. 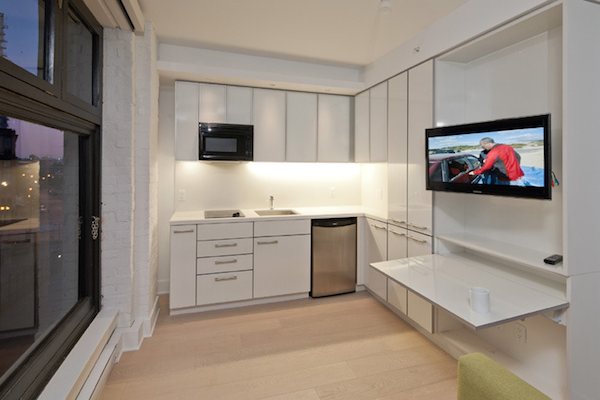 Older post: How to Live in Your Car, SUV, or Van while Traveling.. Adventure Van Dwelling