Recently I was made aware of a tiny house page on Facebook called Extreme Makeover: Tiny Home Edition.

I thought the concept was interesting at first but really didn’t think much about it at that point.

Next thing I knew I noticed some horrifically hateful things on the page that made me think twice.

Several people were referring to her page as a scam, “these people think that I’m trying to commit fraud with regard to the original ABC-TV show, using the show’s name to scam people out of their money. That couldn’t be further from the truth,” the page owner told me.

I emailed Sally Schrock, the tiny homeowner, to find out more and while I am sure I don’t have the whole story I do feel as though I know enough about her tiny house situation to speak confidently. 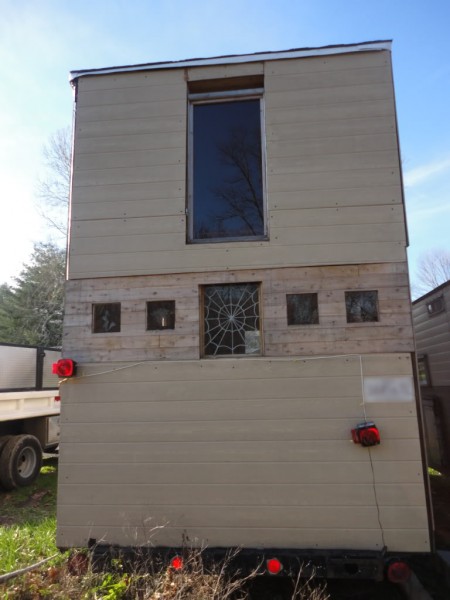 See below to read more about her project.

“I’m profoundly deaf and have been since birth; when my mom was pregnant with me, she contracted rubella, aka German measles which destroyed most of my hearing. When my parents found out that I was deaf, my mom decided to go back to college to earn her master’s degree in audiology so she could help me achieve my potential in a hearing world and at the same time help other deaf and hard of hearing adults and children,” Sally told me of her early experience.

“After living with my baby brother in California for a few months and in a group home in Long Beach, I ended up in Illinois where I stayed until late June of 2011 in a homeless shelter. It was then I went to southern Maryland, where I’ve been staying since.”

It was then that Sally learned about an unfinished tiny house for sale nearby. “I have to admit that at first I was not impressed by it. It looks as ugly as sin on the outside to be sure, but the more I looked at the photos, especially the interior, I began to really see the potential that it has to become a truly wonderful home on wheels, one I could see myself living in, and the asking price of $1750 was close to my range. I was able to get the seller to come down to $1650, which I feel is a real steal considering the flatbed trailer alone is probably worth that much.” Since that time Sally started an IndieGoGo campaign to raise money to finish the house and rent land on which to park. Like Sally’s inspiration for the site, ABC’s Extreme Makeover: Home Edition, she says she “truly want this to be a community event where people can come together to make this a reality. What would be awesome is bringing the house to, say, Lowe’s or Home Depot where these people can get in there and make it over, just like on the popular TV show, but obviously on a much smaller scale.”

I’m not interested in the personal vendetta between her and the group who cried “scam” over her Facebook page. What I do like is the idea of crowdfunding for projects such as this. Therefore I believe it should be an individual choice to support people reaching out for help in our community. To this end I wanted to share Sally’s story and her Tiny House Home Makeover to give everyone an opportunity to see her project and decide for themselves.